Browse: Home / Uncategorized / Twelve Steps, The Thought Made Me Wretch, Until I Bled To Death.

Twelve Steps, The Thought Made Me Wretch, Until I Bled To Death. 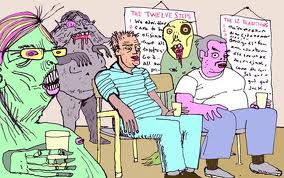 Yeah, I said it. I’m a recovering addict and I hated 12 Step. Somehow I managed to avoid NA for 15 years of meth addiction, with the exception of a short time when I was 19. I ended up putting myself in a psych ward 6 months before I turned 20 for hurting myself. I was really on the edge of no return. While I was there I was honest about my drug history even though I wasn’t using at the time, which landed me in chemical dependency classes and their version of a 12 Step program. I will just say that I was not a happy camper about this at all.

At this place, all of the people who needed meetings went to the same one. Gamblers, addicts, alcoholics and anyone who needed 12 Step all in the same place. I didn’t feel I could relate, I was young and closed minded, and especially since I was seriously angry and resistant to being there in the first place, it wasn’t an effective means of therapy for me at all. My excuses were that I didn’t drink to begin with, had never gambled, didn’t have a food addiction and wasn’t using drugs anyways so why was I there? Not to mention I was still a teenager and everyone else in the meeting was at least 10 years my senior.

After my month in the hospital I was released and I walked away from 12 Step intending never to return. I really believed that I hated 12 Step! I had the impression it was just a place where people gathered to tell war stories, justify their problems and glorify their addictions. I mean, that was my experience with it so far, and because I was so resistant and judgmental, I never considered that maybe this wasn’t the reality of 12 Step, maybe this wasn’t the way things were suppose to be. And anyways, I didn’t need to go to meetings. I wasn’t using so what was the point.

Well I didn’t stay clean for long, and when I did relapse I didn’t quit again for a very long time. In fact, I didn’t get clean for good until I was 30.

Believe it or not, I have been successful in my recovery without utilizing the 12 Step Fellowships. I chose a different type of program that didn’t require 12 Step meetings at all. I have been clean for almost 4 years and, until the past month, in that entire 3 years and 10 months I only attended one NA meeting. I only went to that one meeting because a friend of mine convinced me to go with him. He was on a mission to prove to me that not all meetings are bad. And he was so right. I had a great time at the meeting he took me to, and you know, if I didn’t live an hour away, I would go with him again. It was powerful enough to change my mind. It was really humbling, it really was.

A mind is like a parachute, it works best when open.

Since I live so far from that meeting and my own program, I eventually decided to reach out to the local recovery community in my area via Face book and was delighted to receive a private message from a woman I know and admire, inviting me to her favorite meeting in our town. I went to my first local meeting a month ago and haven’t missed one since. It’s a great meeting full of honesty and real support. Nothing like the first meeting I attended so many years ago. I have found sisterhood and compassion there, without all the stuff that was such a huge turn off with the first meetings I went to and really hated.

Honestly, I still really know nothing of significance about the Fellowships except that they make enormous differences in so many people’s lives. And that is enough for me to respect that the program is of amazing value to people and society in general. I have learned, from what I do know about the 12 Step programs compared to my own recovery program, that there are many parallels and similarities. But I am learning more, I purchased a copy of the Twelve Steps and Twelve Traditions and am reading it, and since I already own The Big Book and the NA book I will read those as well.

I didn’t think 12 Step was for me. I really believed it was a bunch of crap. But you know I was wrong. It has already changed my life so much just in the month I have been attending. I have so much gratitude for the women there and for myself, for opening my mind enough to give it another chance.

Jamie Lee Beals is a full time mother, recovering meth addict and the blogger at http://stepstorecovery.com/