Browse: Home / Blog / Singleness of Porpoise, This Boat Won’t Float for it Holds no Water. 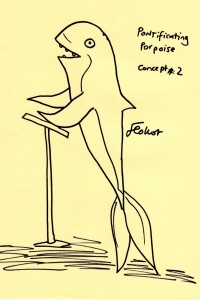 Alcohol and drugs are equal opportunity destroyers. The disease takes no heed to your particular flavor of addiction labeling it as such is the much greater affliction.

The divisions started with Bill Wilson’s “singleness of porpoise” which I believe dose not hold any water, then or now creating the indignation of the drunken community to gain a delusional and pristine application of recovery. This gave the bleeding deacons the ammunition of agreement to ridicule the drug addicts as unwelcome this literately forced Jimmy K to seek his own way with the blessings of Bill as well as financial support to keep the fledgling NA a float. The irony is that singleness of purpose also contradicts the Third Tradition

At first the elders could look only at the objections. “We deal,” they said, “with alcoholics only. Shouldn’t we sacrifice this one for the sake of the many?” So went the discussion while the newcomer’s fate hung in the balance. Then one of the three spoke in a very different voice. “What we are really afraid of,” he said, “is our reputation. We are much more afraid of what people might say than the trouble this strange alcoholic might bring. As we’ve been talking, five short words have been running through my mind. Something keeps repeating to me, ‘What would the Master do?’” (Referring to Jesus) Not another word was said. What more indeed could be said?

A reputation once broken may possibly be repaired, but the world will always keep their eyes on the spot where the crack once stood even though no wider than a hair

Tirelessly he laid A.A.’s message before scores of people. Since this was a very early group, those scores have since multiplied themselves into thousands. Never did he trouble anyone with his other difficulty. A.A. had taken its first step in the formation of Tradition Three. This strange alcoholic was a drug addict- and who were the thousands he helped? See more at: https://rumradio.org/thricetradition-three/…