Browse: Home / In The Beginning, Tradition One

In The Beginning, Tradition One

1) Each member of Alcoholics Anonymous is but a small part of a great whole. A.A. must continue to live or most of us will surely die. Hence our common welfare comes first. But individual welfare follows close afterward.

The best solution is good for the individual AND the group Dr. John Nash  (A beautiful mind)

THE unity of Alcoholics Anonymous is the most cherished quality our Society has. Our lives, the lives of all to come, depend squarely upon it. We stay whole, or A.A. dies. Without unity, the heart of A.A. would cease to beat; our world arteries would no

Longer carry the life-giving grace of God; His gift to us would be spent aimlessly. BackAgain in their caves, alcoholics would reproach us and say, What a great thing A.A. might have been!

Does this mean, some will anxiously ask, that in A.A. the individual doesn’t count for much? Is he to be dominated by his group and swallowed up in it? We may certainly answer this question with a loud No! 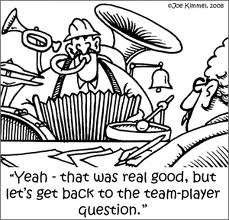 The pulse is about the ebb and the flow, the life’s blood is unity that pumps through the arteries with God’s grace to the heart of recovery. Without it there would no place to go other than back to the cave of regret and upon our lips would imprint, the saddest words of tongue or pen it’s what might have been

Man overboard, do we sail on with a callous fair thee well, nay we come about, all hands to the rigging with life lines fore and aft for if any go down we stay afloat from keeping the one from sinking.

There are two types of enemies of free speech who seek to rob the individual of his freedom to think and to act:

When told that our Society has no president having authority to govern it, no treasurer who can compel the payment of any dues, no board of directors who can cast an erring member into outer darkness, when indeed no A.A. can give another a directive and enforce obedience,

We believe there isn’t a fellowship on earth which lavishes more devoted care upon its individual members; surely there is none which more jealously guards the individual’s right to think, talk, and act as he wishes. No A.A. can compel another to do anything; nobody can be punished or expelled. Our Twelve Steps to recovery are suggestions; the Twelve Traditions which guarantee A.A.’s unity contain not a single Don’t. They repeatedly say We ought . . . but never You must!. To many minds all this liberty for the individual spells sheer anarchy. Every newcomer, every friend who looks at A.A. for the first time is greatly puzzled. They see liberty verging on license, yet they recognize at once that A.A. has an irresistible strength of purpose and action. How, they ask, can such a crowd of anarchists function at all? How can they possibly place their common welfare first? What in Heaven’s name holds them together?

Alas from my own personal experience I had been banished from my home group by the president of the board of directors after the group conscious had given me a pass to act. My heinous infraction I was handing out recovery cards to the RumRadio.org Big Book sponsorship website, the infraction cited was shameless self-promotion, I was cast out to outer darkness without any redress of grievance. The story is now posted on the site, The Cast of Outer Darkness I was going to refrain from posting it to the site as not to make it my personal gripe, but it does illustrate the usurpation of control when the Traditions are trounced, My sponsor had encouraged me to take a more active role to force the issue in open court. I declined, as you know we have agreed to stop fighting everything and everyone, including alcohol, but I can gripe a mite.

We have by Traditions of agreement the freedom to be, the freedom to act, and the freedom to speak with complete impunity from any and all corrective actions, including censure, expulsion and ridicule of thought. There are no demands or regulations as there is no agency or police to enforce.  At the very best we can do is suggest (the calling up in the mind of one idea by another by virtue of some association or of some natural connection between the ideas.)

It is in Heavens name, it is God in the guise of an informed group conscious where all decisions both large and small regarding the direction of the group are made. It is only when God is given lip service and not included in the debate that we are once again we are faced with rancor and disdain. Dr. Bob alluded to that no decision should be attempted without prayer and then the right answers always will come

I’ve only paid lip service to a spiritual life. Sting

Those who look closely soon have the key to this strange paradox. The A.A. member has to conform to the principles of recovery. His life actually depends upon obedience

to spiritual principles. If he deviates too far, the penalty is sure and swift; he sickens and dies.

At first he goes along because he must, but later he discovers a way of

life he really wants to live. Moreover, he finds he cannot keep this priceless gift unless he gives it away. Neither he nor anybody else can survive unless he carries the A.A.

message. The moment this Twelfth Step work forms a group, another discovery is made that most individuals cannot recover unless there is a group. Realization dawns

that he is but a small part of a great whole; that no personal sacrifice is too great for preservation of the Fellowship. He learns that the clamor of desires and ambitions within him must be silenced whenever these could damage the group.

It becomes plain that the group must survive or the individual will not.

To what I call paradoxes, which are nothing else than grandiose thoughts in embryo….

We have had to make agreements of spiritual change and with that an acknowledgement that the he or she is no longer running the show; we can now lay down the heavy burdens that come from carrying the cares of the world. I used to live in Hell, but I knew where all the light switches were. If self-will rears it familiar head again we find ourselves less than alive and more than dead. When we first visit Rome to get along we go along as pain seems to flee in our new found environment of love. The realization that the necessity of service is the key to long term recovery to be happy, joyous, and that life is not free, starts to come naturally. Carrying the message will create a group and all recovery depends on the We, it takes you and me, and the support of a likeminded Tribe, even though I am but a small cog nobody passes the buck for there are no big wheels only shoulders, hills and God’s will. To conform, acquiesce, and agree with a buttoned lip especially when we are correct or worse than that we are in the right, it’s hard to kowtow when you have always been a know it all. My greatest good depends on what’s good for the entire tribe; otherwise it’s a collective suicide.

Without relationships, no Matter how Much wealth, fame, power, prestige and seeming success by the standards and opinions of the world one has, happiness will constantly eluded him.  Sidney Madwed

So at the outset, how best to live and work together as groups became the prime question. In the world about us we saw personalities destroying whole peoples. The struggle for wealth, power, and prestige was tearing humanity apart as never before. If strong people were stalemated in the search for peace and harmony, what was to become of our erratic band of alcoholics? As we had once struggled and prayed for individual recovery, just so earnestly did we commence to quest for the principles through which A.A. itself might survive. On anvils of experience, the structure of our Society was hammered out.

The only things worth learning are the things you learn after you know it all.  Harry S Truman

Doctors, lawyers and captains of industry, some are fresh from the mean streets surviving through the kindness of strangers and then occasionally diving for dumpster scraps, then some who have been recently released  from the asylum lock up. We are from Penn State and the State pen. There are Housewives, executives and camp girls that hung their shingle while hot on the trail of Gen Hooker next bivouac. We are a group that otherwise would not mix. We are folks that could only be taught by the pain of living and for some when dying was the only unreasonable solution. With the hard knocks of growing pains and the occasional fist fight to determine who had the most serenity we had to agree to smooth out the wrinkles of conformity to God’s will through and with the preservation of the independent and prayerful group conscious.

Countless times, in as many cities and hamlets, we reenacted the story of Eddie Rickenbacker and his courageous company when their plane crashed in the Pacific. Like us, they had suddenly found themselves saved from death, but still floating upon a perilous sea. How well they saw that their common welfare came first. None might become selfish of water or bread. Each needed to consider the others, and in abiding faith they knew they must find their real strength. And this they did find, in measure to transcend all the defects of their frail craft, every test of Uncertainty, pain, fear, and despair, and even the death of one  (Kaczmarczyk)

Watches stopped working, the compass needle froze. Rickenbacker’s secret orders from Stimson faded out, and his map stuck together at the folds. Most of the items were of little use, however, because no one knew where they were, and time seemed irrelevant.

Rickenbacker tried everything to keep the men going. When sympathy proved ineffective, he would lash out with criticism  anything to prod them not to lose faith. One of the men called him the meanest and most cantankerous SOB he had ever known. Several of the men, Rickenbacker later learned, had sworn an oath that they would continue living, hoping for the pleasure of burying him at sea. (For some of us we were going to stay sober just to spite that particular S.O.B.)

When alone forgotten and in despair and the most dire of circumstance, comfort and strength of will often times come from a like stranded crew of orphans from the storm, when seeking God’s will it’s every man. women, and child to the oar.

Thus has it been with A.A. By faith and by works we have been able to build upon the lessons of an incredible experience. They live today in the Twelve Traditions of Alcoholics Anonymous, which God willing, shall sustain us in unity for so long as He may need us

God does and continues to sustain our Traditions as long as we honor and sustain Him.