Browse: Home / Step Seven, Thinking Of You More than Me that’s called Humility

Step Seven, Thinking Of You More than Me that’s called Humility 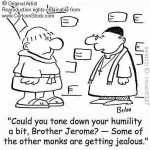 The Simplicity of The Twelve Steps- Step Seven (Humility)

Humility is like underwear, essential unless it shows, then its indecent.

It’s not the heat, It’s the humility  Yogi Berra

My very favorite definition of humility is given by one of our co-founders, Dr. Bob Smith who claims humility to be, “A clear understanding of who and what we are followed by a sincere attempt to become what we could be.”  I would offer that while many people in A.A. would suggest that the fourth and fifth step show us who we are, I believe that what those steps actually achieve are showing us who we are not.  I would further offer that in Step Six and Seven, we become willing to let go of who we are not, which will then begin the process of finding out who we are.  Michelangelo said, “Every block of stone has a statue inside it and it is the task of the sculptor to discover it.”  Obviously, the process of sculpting involves finding the statue within the stone by cutting away all the pieces that are blocking its truth.  Similarly, in the alcoholic, the step work chips away at all the falsities that are blocking the prospect form God’s love, that he may come to find his truth.

The seventh step, much like the third step, is housed within a prayer.  The prayer, found in the second paragraph on page 76, reads:

When ready, we say something like this: “My Creator, I am now willing that you should have all of me, good and bad. I pray that you now remove from me every single defect of character which stands in the way of my usefulness to you and my fellows. Grant me strength, as I go out from here, to do your bidding. Amen.” We have then completed Step Seven.

In terms of their basic construction and what they are requesting, the third and seventh step prayers are actually quite similar.  They are both essentially asking God to remove what is in the way of God getting through.  There is one key difference though, and this is found in the specificity of the seventh step prayer.  In the third step prayer, when we first say, “God, I give myself to thee…,” we really have no idea what we are giving to God as we really don’t have much idea who we are.  Now, in the seventh step prayer, having done an honest and thorough fourth and fifth step, we can now say that God, “should have all of me, good and bad,” with a strong working knowledge of our assets and liabilities.

We are now able to interact, in our prayer life with God, with a complete list of our character defects.  Although, we want to bear in mind that the step does not read, “I pray that you now remove from me every single defect of character.” This prayer would prove highly problematic as the prayer being answered is a sheer impossibility.  We will find out shortly, in the tenth step, that resentment, fear, dishonesty and selfishness will assuredly continue to play a part in or lives.  We want to be careful to remember that while we have recovered from a hopeless state of mind and body, we have not recovered from being human.

What we are asking for is the removal of the amount of these defects which is in the way of achieving our primary purpose.  As an example, in my alcoholic life, I was a world champion liar.  When I first employed the seventh step prayer, I did not ask God to take away all my dishonesty.  I asked God to remove whatever amount of my dishonesty was in the way of my doing service and carrying this message effectively.  I can say, unequivocally, that every drop of dishonesty which was blocking that level of usefulness was removed a decade and a half ago never to return.  The rest of my dishonesty?  I’m still working on it.  The prayer removed the most toxic parts of my dishonesty and the tenth step helps me navigate the rest of it.

With a clear understanding of the task at hand, we have the prospect speak this prayer aloud and agree to join the seventh step prayer with their third step prayer as a part of their morning spiritual practice.  With these two prayers in place, they are building toward a life of communing with God through daily prayer and meditation, which they will fully launch in Step Eleven.