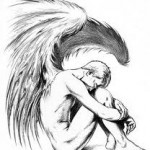 I am a recovered alcoholic, my name is Michael.  What I am recovered from is a hopeless state of mind and body which was systematically killing me through the most nefarious brand of torture imaginable.  The Big Book terms it, “pitiful and incomprehensible demoralization.”  I lived in hell for the first twenty-five years of my life.  First there was the covert hell of living each and every day sure that I was broken in a way that no human being had ever been broken before; and then came the hell of spiraling in a sea of booze and chemicals slowly dragging me toward an alcoholic death.  My restlessness, irritability and discontentment was a perpetual state from which I deeply believed there was no escape.  Turns out I suffered from a very common illness to which there was a remarkably simple solution.

I will spare you an extensive drunkalogue.  I will avoid such a thing for two simple reasons.  First, my “story” bores the hell out of me.  It didn’t always resonate that way, mind you.  When I first entered the rooms of recovery, I understood my story to be unbelievably fascinating.  I longed for an opportunity to recount all the gory details to anyone who would listen.  In retrospect, I have a hard time locating what in the hell I thought was so interesting.  It was the same people and the same stories and the same women and the same bars and the same shit day after day after day.  You know what’s interesting?  Recovery,  Recovery is interesting.  Since I put down my medicine on September 20th, 1997, not one day of this journey has looked anything like any other day.  Some of them have been abundantly glorious.  Some of them have been abysmally painful.  But every single one of them has been a unique cog in the ongoing odyssey of Michael being the main player in his own existence.

The other reason I will choose to not belabor with you with machinations of my alcoholic life is because I trust that you could not possibly need any more data on how to successfully destroy a life.  I don’t know about you but I don’t spend time in Alcoholics Anonymous to hear stories about people undoing themselves.  I know how to do that.  I am an expert in this arena.  I go to A.A. to find out more about waking up every morning with hope; about living comfortably inside my own skin and walking outside amongst the humans actually feeling like one of them, no better or worse than anyone; a person among people, a worker among workers.  In terms of a speaker making clear to me that they qualify for the seat, there are really only two drinks that I need to hear about; the first one and the last one.  In light of this, I will take this opportunity to present my qualifications to be a member of this glorious organization.

I was fourteen years old and closing in on the end of my freshman year of high school.  A girl named Kim, whose parents had left town for the weekend, was hosting what promised to be the bash of the year.  A senior named Patrick gave me a ride to the big jam and I vividly recall hopping out of his car and walking down the long grassy slope leading to Kim’s spacious home.  As I approached the door, a kid named Marty came walking toward me with a welcoming smile and two cold beers.  I had tried alcohol before this point, but nothing more than a sip or two here and there.  Marty was one of the cooler kids in my class and, while we were quite friendly, the want to impress him was always great.  With the awareness that chugging a beer was considered quite cool by most, I realized that I had a great desire to do just that with the can he had handed me.  On the other hand, I was holding some fear that my efforts to do so would be unsuccessful resulting in spitting it back up or having it dribble out through my nose.  Having made a risk versus reward assessment, I decided to take a run at it and, while quite difficult, I successfully chugged the beer.  I remember that I liked that I had done it.  Even more than that, I remember liking that he liked it.  But what I remember most of all was that from the time it took me to the finish the beer to the time I crossed the threshold into Kim’s house, I became aware that fourteen years of fear had evaporated as a result of one aluminum can of liquid.  I proceeded to ask myself what I still understand to be an entirely brilliant question: “Where’s more of this and how do I never run out of it?”

I drank all night and passed out behind a couch.  When I came to the next morning it was clear that more than half the party had done the same, with bodies strewn hither and nigh throughout Kim’s living room.  As I sat up, I found myself replete with the many morning after symptoms which were soon to become all too familiar elements of my life: my mouth was a desert, my stomach was in knots, my head was pounding, my joints ached.  Actually, none of this concerned me too greatly.  What did concern me, though, was the fact that I had managed to shit my pants in the night.  With this fact firm in mind, I realized I needed a plan… and fast.  I jumped up, found the guest bathroom, stripped off my pants, pulled off the polluted underpants (making sure that they were not one of the pairs from sleep away camp which had tags with my name sewed into the waistband), threw the soiled underpants underneath the sink (with the brillo and toilet brush), and hit the pavement.  When I returned to school on Monday, my nasty little stash clearly having been discovered, everyone was talking about the repugnant incident… including me.  “Somebody did what?!” I was asking my buddies.  Nobody knew it was me.  Within a day or two, the storm passed, and that was that.

The message I took from this experience was the following: I drank alcohol, it was awesome, I ran into a little jam, did what I needed to do to deal with it, it’s all good.  And every single story I could possibly tell you about my resultant drinking and drugging career is that story.  Every one.  Some of those stories include drugs; some don’t; some of them include women and sex; some of them include cops; some of them of them are funny, some of them are tragic.  But every single one is simply the story of Michael having a complete inability to live inside of him self and searching desperately for an anesthetic that would successfully shut down the feelings.

And where this led me a little over a decade later, was a life lived almost entirely within my living room, smoking crack and snorting heroin round the clock, naked (as I was sweating too much to wear clothes), watching reruns of Sports center which I had already seen three times that evening, and wondering how I had gotten there.  And this confluence of exterior mess brought me to what we like to refer to as a bottom.  The best definition for bottom that I have ever heard is, “The bottom is the point at which the circumstances of your life begin to drop quicker than your ability to justify them.”  And that is precisely what occurred for me.  All of a sudden, and without warning, my medicine stopped silencing the screams in my head and began to amplify them.  My father had been in A.A. for about a decade at that time and, not quite ready to put a bullet in my head, I came to you people.

The first things an alcoholic ever said to me in an A.A. meeting was just after the conclusion of my very first one.  I had zipped over to the coffee urn to grab a cup of java for the road, when a guy came up behind me and said:

Me (having turned with a confused look): Are you talking to me?

Me: Of the meeting?

Guy: Oh.  How long did it take you to figure out that you didn’t like it?

Me: About five minutes.

Guy: But you stayed the whole hour.  Why?

Me (hesitating): Just forget it.  You wouldn’t understand.

Me: Well, even though I don’t really like you people, you seem to have something that I have been looking for my whole life… and… and I don’t even know what it is.

Guy: Do you want to know what it is?

Me: What the hell, man?  I am clearly not asleep.

Guy: Really?  Let me ask you a question.  Are you the central factor in your own life?  Are you driving your circumstances and participating or are you standing still while your life just happens to you?

Me (stunned): The second one.

Guy: You believe in God, but you don’t have a relationship with God.

Me: How the hell do you know?!

Guy: Because up until today you’ve been killing yourself with alcohol.  That’s how I know.

Me: Fine.  How do you have a relationship with God?

Guy: You see the literature table over there?  Right in the middle there is a blue book.  The answer to your question is in there.

And two things that every newcomer should know about this program of ours are: