Browse: Home / Step One, A Simple Truth Stands On It’s Own

Step One, A Simple Truth Stands On It’s Own

The Simplicity of The Twelve Steps- Step One (Truth) 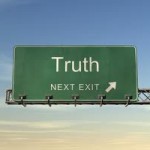 Evidence of how much Alcoholics Anonymous struggles with its own powerless can be easily found in what we regularly refer to as “First Step Meetings.”  This occurs when a man or woman, brand new to our fellowship, is carted off into a private room after the opening announcements of a meeting with four or five of the “old-timers” to be given their own special introduction into A.A. via the first of the twelve steps.  In theory, this is a marvelous idea.  After all, the purpose of the first step is to help the potential alcoholic decipher whether or not they have this illness.  The problem is that the newcomer almost never comes out of that first step meeting with a clear understanding of the first step.

Generally what will happen is that each of the “old-timers” will tell a modulated version of their “story,” detailing all the mess and the damage and the pain and then conclude with something along the lines of, “…and then I cam to A.A. and it saved my life.”  So, this man walks out of the meeting and what does he know?  Does he know what makes an alcoholic an alcoholic?  Does he know if he qualifies as a real alcoholic?  Does he know if the people telling the stories qualify as alcoholics?  Does he have any idea what his next right action is other than “keep coming back?”  Is it really asking too much that just one of the old-timers in that room might have a copy of the basic text of the organization and have the wherewithal to flip to page XXVI and read the first and last paragraphs on the page to this poor guy?

In the first step, the task we are charged with is gaining a clear understanding of what alcoholism is, whether we or not we are suffering from it and whether we are prepared to seek a solution.

Most alcoholics just entering A.A., if asked how they know whether or not they are alcoholic, will generally point to data attending to their intake, specifically how much or how often they drink alcohol.  Upon being told that these factors are not the key indicators in making a proper diagnosis, they will generally register confusion.

We want to let them know that there are two specific conditions they need to be suffering from to qualify as the kind of alcoholic being described in the book.  The first of these is found on pg. xxvi (in the fourth edition) in the first full paragraph:

“We believe, and so suggested a few years ago, that the action of alcohol on these chronic alcoholics is a manifestation of an allergy; that the phenomenon of craving is limited to this class and never occurs in the average temperate drinker. These allergic types can never safely use alcohol in any form at all; and once having formed the habit and found they cannot break it, once having lost their self-confidence, their reliance upon things human, their problems pile up on them and become astonishingly difficult to solve.”

The prospect may find that “allergy” is a curious word being used in relation to their drinking.  We can let them know that the word refers simply to an abnormal reaction to something.  An abnormal reaction to strawberries is generally hives.  With peanuts, most people experience throat constriction.  The abnormal reaction to alcohol is such that once an alcoholic takes a drink, they have no capacity to determine how many more drinks will follow that first one.  It might be two.  It might be twenty.  They can never be sure.  This is abnormal.  It is abnormal in that it is not supposed to happen.  A normal drinker desiring a drink will experience an immediate internal sense of satisfaction upon their first sip.  It may take a whole drink, or a few, for them to reach complete satisfaction, but the initial feeling of satisfaction will be immediate.  When an alcoholic take the first sip, their desire for alcohol will not be satisfied; it will be amplified.

Interestingly, what we have here is an entirely manageable condition.  If the alcoholic had nothing but the physical allergy, the problem would be almost comically simple to solve.  Don’t drink.

In this regard, it is no different than any other allergy.  Think of a man who develops an allergy to peanuts in his early twenties, and upon eating some peanuts one day, finds his throat close to the size of a pinhole and nearly dies.  Recovering in his hospital bed, the doctor enters to check on him and the man says, “Doc.  That was awful.  I don’t ever want to have that experience again.  Is there anything you can recommend?”  What’s the doctor’s prescription?  Obviously, he’d confidently state, “Don’t ever eat peanuts again.”  And what does the man do?  He never eats peanuts again.  This is what we call sanity.  And this is why there is not a Peanuts Anonymous.

The difference, of course, is that the alcoholic has more than just a physical allergy.  The allergy is compounded by another component detailed at the bottom of the same page (xxiv in The Doctor’s Opinion):

“Men and women drink essentially because they like the effect produced by alcohol. The sensation is so elusive that, while they admit it is injurious, they cannot after a time differentiate the true from the false. To them, their alcoholic life seems the only normal one. They are restless, irritable and discontented, unless they can again experience the sense of ease and comfort which comes at once by taking a few drinks-drinks which they see others taking with impunity.”

Clearly, the reason that the man allergic to peanuts can easily stay away from the peanuts upon diagnosis of his condition is because this man will not find himself filled with restlessness, irritability and discontentment as a result of having no peanuts in his system.  Conversely, the alcoholic having sworn off alcohol, will eventually find himself so incapable of living inside his own skin that he will turn to the only he thing he knows of which will quell the pain, a few drinks.  Much like the physical allergy, the mental obsession, by itself, is an entirely manageable condition.  If a person finds that when they feel restless, irritable and discontent that a few drinks will take care of the problem- then there is no problem.  Just take a few drinks.

The illness of Alcoholism lies in the fact that the fix for each of these conditions is the very thing that triggers the other, creating a deadly cycle which history has proven unbreakable by the employment of human measures.  And a full understanding of this fact is the key to our first step directions.

On page 30, in the chapter called “More About Alcoholism,” we are given a clear window into the reason that many people, even after seeing clearly that they are suffering from both the allergy and the obsession, still have trouble making the admission of powerlessness:

“Most of us have been unwilling to admit we were real alcoholics. No person likes to think he is bodily and mentally different from his fellows. Therefore, it is not surprising that our drinking careers have been characterized by countless vain attempts to prove we could drink like other people. The idea that somehow, someday he will control and enjoy his drinking is the great obsession of every abnormal drinker. The persistence of this illusion is astonishing. Many pursue it into the gates of insanity or death.”

They are letting us know that while the idea of someday figuring out how to drink like regular people is perfectly normal, that you might consider getting over it quickly as it is the very thought that puts most alcoholics in the ground.  With that, we are given the task necessary to move to step two in the following paragraph:

“We learned that we had to fully concede to our innermost selves that we were alcoholics. This is the first step in recovery. The delusion that we are like other people, or presently may be, has to be smashed.”

If you must hold to the idea that, regardless of your alcoholism, figuring out how to revert to a normal drinker might be a reality for you down the road, than you still have some research to do.  On the other hand, if you can smash the idea that reverting back from pickle to cucumber could ever be a possibility, you are ready to move to the second step.