Browse: Home / T.H.I.Q. and The Disease Concept of Alcoholism

T.H.I.Q. and The Disease Concept of Alcoholism

Everything that used to be a sin is now a disease.  Bill Maher

T.H.I.Q.  was  discovered  in  brains of  alcoholics  in  Houston,  Texas by a scientist  named Virginia Davis who was doing cancer research for her study she needed fresh human brains and used bodies of homeless winos who had died during the night and were picked up by Houston police in the morning she discovered in the brains of those chronic alcoholics a substance that is closely related to  Heroin.  This substance, known to scientists, is called Tetrahydrolsoqulnoline or THIQ.

Dr. Frankenstein whose brains did you retrieve Igor it was Abby Normal’s” brain 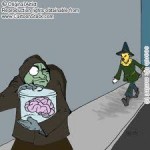 When a person shoots heroin into their body, some of it breaks down and turns into THIQ. The Alcoholics studied had not been using heroin so how did the THIQ get there?

I might be living down in the gutter, but I have more sense than  to be shooting up

When the normal adult drinker takes in alcohol, it is very rapidly eliminated at the rate of about one drink per hour.  The body first converts the alcohol into something called

Acetaldehyde. This chemical is VERY TOXIC and if it were to build up inside us, we would get VIOLENTLY SICK AND COULD DIE, but Mother Nature helps us to get rid of acetaldehyde very quickly. She efficiently changes it a couple of more times – into carbon dioxide and water – which is eliminated through kidneys and lungs. That’s what happens to normal drinkers. It also  happens  with  alcoholic  drinkers,  but with  alcoholic drinkers  something  additional happens.

I knew it, as a drunk I am immediately entitled to the bonus plan

What Virginia discovered in Huston has been extensively confirmed since.  In alcoholic drinkers, a very small amount of poisonous acetaldehyde is not eliminated. Instead it goes to the brain. There through a very complicated biochemical process, it winds up as THIQ

Research has found the following

It is not manufactured in the brain of the normal social drinker of alcohol.

2. THIQ has been found to be highly addictive.  It was tried in experimental use with

3. Experiments have shown that certain kinds of rats cannot be made to drink alcohol. 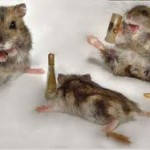 Put in a cage with very weak solution of vodka and water, these rats refuse to touch it. They will literally thirst to death before they agree to drink alcohol. However, if you take the same kind of rat and put a minute quantity of THIQ into the rat’s brain — one quick injection “ the animal will immediately develop a preference for alcohol over water.

A. Once the THIQ is injected into a monkey’s brain, it stays there.

B. You can keep the monkey dry, off alcohol, for 7 years. Brain studies show that THIQ

remains in place in the brain.

The monkey might be off my back, but the circus is still in town

The alcoholic’s body, like normal drinkers, changes the alcohol into acetaldehyde and then it changes most of it into carbon dioxide and water, which in the end kicks out through the kidneys and lungs. However, the alcoholic’s bodies won’t kick all these chemicals out. The Alcoholic’s  brain  holds  a  few  bits  back  and  transforms  them  into  THIQ.  As  THIQ  is accumulated  in the  brain of  an  alcoholic,  at  some  point, maybe  sooner, maybe  later,  the alcoholic will cross over a shadowy line into a whole new way of living. 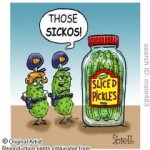 It is not known by medical science, at this time, where this line is or how much THIQ an

Individual brain will pile up before one crosses this line. Some predisposed people cross the line while they’re teenagers, or earlier.  Others cross in their 30’s or 40’s and others after retirement. But once this happens the alcoholic will be as hooked on alcohol, as he would have been hooked on heroin if he’d been shooting that instead.

With  the  loss  of  control,  the  complex  symptoms  have  become  chronic.  All aspect of physiology has become progressive and incurable. Now it is clearly a disease.

1. Alcoholism is a disease.

2. Alcoholism is not the alcoholic’s fault.

3. Alcoholics can get proper treatment for the disease, which begins with telling them

4. The alcoholic can be relieved of guilt.

5. The alcoholic can take on responsibility for arresting their disease.

6. The alcoholic can refuse to put more THIQ in their brains and refuse to activate the THIQ that is already there.

7. Alcoholics can and do recover. If they have the capacity to be honest, are willing to clean up the wreckage of their past, and expand their spiritual life.

He who conceals his disease cannot expect to be cured

Relation between heroin and alcohol

TRUTH, Costs, Don’t, Facts, How, Why Should I Care,

Laws, Numbers, T.H.I.Q., Life You Can Give Your Children,

You’re Stories, What You Can Loose

An additional note from me, kk: When Anabuse is taken, the drug blocks the metabolic

I have been there, and taken, it and drunk on it. It is a bad, bad drug that can cause kidney and liver damage… not a good recovery choice. It goes along with the old aversion therapy.