Browse: Home / My sponsee calls me drunk, now what?

An agreement made with sincerity of conviction and with best intent, becomes handily misplaced when King alcohol demands interest on the past due rent

Never argue with a drunk

Never try to show the sunset to a blind man. 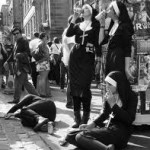 I suggest to my new sponsee (when, more than if) the craving to drink is overwhelming to find a place and get on your knees and ask God to remove the friendly and fiendish call for alcohol

I suggest to my new sponsee’s to call me before they drink, if I’m out of pocket to call someone on their life line list of program members or sober friends. To get to a meeting and be open and forthright and let the folks know you’re in a terrible way.

My experience is that new sponsee if they “have had enough will gladly agree to almost anything.  New sponsee’s in recovery are particularly vulnerable (see law of opposition, Captain’s table)  and settle in quickly and have a tendency to overdo (making up for lost time financially) and soon get cocky and complacent. Having discovered “the cure (it is the great obsession of every abnormal drinker that someday he will control and enjoy his drinking; some take this illusion to the gates of insanity and death). The phone calls start getting further afield as they are catching up with their career lives romantic lives etc, as their opportunities increase their priorities shift. I call once, twice and then let go (for what we pursue evades us).

A phone call inevitably late and inopportune shakes you to your feet, it’s you sponsee lit up, in the wrapper and barley able to communicate, drunk.

They are either remorseful or looking for absolution or defiant and argumentative, as it matters not. The agreement we had to call before the first drink is now mute. Your sponsee is alcoholic and had already made up their mind, and besides he or she is kinda smart and knew what you were going to say anyway, Pray go to a meeting, let’s talk it out,  how about star bucks in an hour? Some program members just shut them out in disgust, holier than thou, I think, I think not. We are alcoholic, that’s what we do, and we drink. Playing God is such a hard row to hoe, it just plain doesn’t work. I do take control of the conversation and inquire if they are in a safe place? And if not, I will come and get them, perhaps saving their life and a school bus full of Nuns. If they are home and in a safe place I assure them that they can get well, but now is not the time or the place, and I would prefer to talk to them and not the alcohol. I offer to meet them as early as possible at tomorrow’s A.A., Meeting, and if needed to give them a lift, if not a ride.

Warning Will Robinson before you get lost in space

The sponsor is not a taxi cab or substitute for public transportation.  A wide eyed and bushy tailed new sponsor who’s is excited about being of service and so wants to give it away can easily be manipulated for nefarious ends, rides that ultimately circumvent the globe only to end up at their local drug dealer’s home . Caution is to be exercised and if possible never go alone.  Less I forget your grand sponsor who has been on these pony rides before, and has the heads up on shinola so we can avoid stepping in it, should we decide to go it alone. Remember if they want it bad enough as a rule they will find their own way to a meeting  the next  day, if not in the morning  surely by late afternoon, just like when we wanted to get to the drugs and the alcohol we were nobody’s fool.

Let them know every morning comes with a promise, a promise of another sober day! And with that, it’s say good night Gracie, and goodnight Mrs. Calabash where ever you are!

The newcomer is the life’s blood to A.A., as the old timer is the back bone  but relapse is the soul, for there is nothing more tormented as a head full of A.A. and a belly full of booze