Browse: Home / Blog / Is it True, is it Necessary, is it Kind? Now You’re Talking

Is it True, is it Necessary, is it Kind? Now You’re Talking 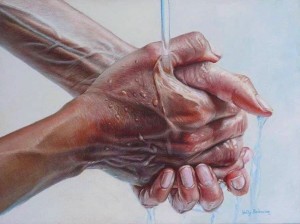 A group of weather worn pilgrims plying their way along the back and dusty roads of Jerusalem were passing by the home of particular Pharisee gentry (known for his religious piety) at a time when he was hosting a lavish bar mitzvah feast. The pilgrims were often forced to fast for the lack of food as they were sustained by the kindness of strangers. The Pharisee sized upon this opportunity to exclaim his magnanimity of piety by inviting these religious pilgrims into his home to enjoy and partake and thus proclaiming a venerable charity. The pilgrims overwhelmed with hunger did not stand on the regular cultural formalities and dove in to abate their pangs of hunger. The Pharisee spoke to their  leader Jesus of Nazareth in the harshest of tones, I thought you were holy men, how is that they partake without washing their hands a sacrilege (washing your hands before eating as well before praying was an agreed part of the law of Moses). And Jesus replied, it is not what goes into a man’s mouth that defileth him, it’s what comes out. (You don’t say)

Before speaking ask yourself, is it true, is it necessary, and is it kind. This will most often negate the need to speak, while allowing you to listen with an interest born of enthusiasm and not for the validation of audition.

As brevity is the soul of wit, guile takes awhile to sink to the depth of a quip, but sarcasm stays busy sharpening the knives that cut flesh to the quick.