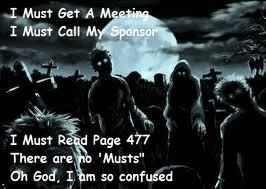 Bill,  said “The sponsor is a mentor, a friend and a sounding board, and a good one… a bad one can also mean the difference between Life and Death.”

I’m not sure if I agree that a bad sponsor makes the difference between life and death. In the beginning I had a bad sponsor and I was getting frustrated. Something told me to get a new one and I did. A turn out this guy was perfect for me. The bottom line was, deep down, I knew what I had to do. I wasn’t gonna let a bad sponsor hold me back or interfere with my recovery.

Tony that was Bill W’s experience, as we all work our own program and evidently you are still here so your experience only speaks to your understanding, I think Bill had a slightly bigger picture in mind. There is a fellow at the P.O.C. in Houston (that had gained some authority of renown by reason of attaining several levels of fame and fortune) that would espouse that his sponsor told him that if he didn’t drink with his sponsee that he was a good sponsor, but he never had anyone that he worked with stay sober, but that was OK because he had maintained his sobriety.

That speaks to the fact does it really matter what the sponsor does or doesn’t do for some evidently not, just keep coming back, but now it’s their turn to sponsor:

Now, if those in the program who are unaware of this information would be willing to be honest about their inability to properly serve, while it might cause some inconvenience for the newcomer, at least he would get the message that he needs to look elsewhere for the help he desires. Unfortunately, our fellowship is loaded with thousands who will happily take on the role of sponsor and then, not only fail to deliver the information on page 94, but, in fact, deliver an entirely different package of information- which often sounds something like this:

“Sure, I’ll sponsor you. Here’s my number. Call me everyday. You’ll need to do 90 meetings in 90 days because meeting makers make it. Don’t drink no matter what, but if you’re thinking about drinking, think the thought all the way through, remember your last drink, and call me before you do it. You are not allowed to have sex or make any major decisions for a year. Make sure to avoid people, places and things. Other than that, take what you want and leave the rest and bear in mind, it is a selfish program. At some point down the road, we’ll talk about taking a look at the steps.”

One response to “Sponsor, Rich and a Switch, Poor and it’s the grave yard Door”