Browse: Home / Blog / Buddha (his friends called him Sid) A moment of enlightenment:

Buddha (his friends called him Sid) A moment of enlightenment: 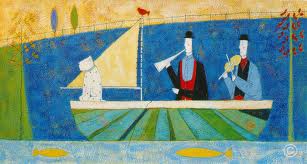 Buddha (his friends called him Sid) in his moment of enlightenment:

Was sitting under a banyan tree on the river’s edge (rivers often times signify a spiritual flow) observed a boat with a musician tightening the strings on his sitar, Sid realized that if the sting was tighten in excess it would snap, and if it was not tighten enough (regress)  it could not produce music but a dull full thump., and that life was like that stringed instrument and to make beautiful music it needs be not too tight and not too lose ( a bit like Goldilocks, just right! ) but the middle way.

The Christian ethic proclaims moderation in all things.

The yin and the yang speak of the eternal and equal opposition in all things, the dark that opposes the light.

As the I-Ching philosophy speaks to excess and regress is the natural course of all creation and to step back from the precipice was in its course enlightenment.

The Hebrew claim that man has to pass this world on a very narrow bridge and the truth is sharp like a strand of hair.

There were two trees in the garden of Eden, the tree of the knowledge of good and evil which was sweet and most desirable , the other was the tree of life and needs be that its fruit was bitter, and how do I know that , because life is bitter. And the best that it gets is bitter sweet.

Curly: Do you know what the secret of life is?

[holds up one finger]

Curly: One thing. Just one thing. You stick to that and the rest don’t mean shit.

Curly: [smiles] That’s what *you* have to find out.

It is  one thing at a time,  for in the moment all creation pours out  all she has  to offer, and  in that  bliss and in the zen  make your life a mission and not an intermission.

For I have found that acceptance was in direct proportion to my serenity and for me the middle way is a road that narrows but the view does broaden.