Browse: Home / Blog / An A.A. meeting matinee, a “Popeye” cartoon and the feature “A Most Fatal Attraction

An A.A. meeting matinee, a “Popeye” cartoon and the feature “A Most Fatal Attraction

The chair was an old black street savvy alcoholic named Sherman; Sherman in his day was a hard core and chronic relapse living on the Streets of San Francisco (Not the TV. Series) and the Bakersfield bay area. Sherman was rescued by a little white feller named Keller in the offer to be his sponsor and take him through the Twelve Steps of recovery.

Sherman began the meeting with the most peculiar of similes, he related his alcohol addiction to the adventures of Popeye the sailor man. Popeye would get into all kinds of dire and deadly predicaments some of which actually happened. 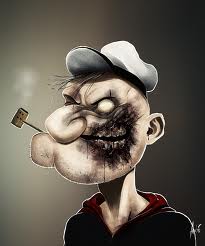 Bluto was Popeye’s arch enemy and chief rival for the affection and attentions of the lovely and precocious Olive Oil. Popeye’s side kick Wimpy would always attempt to put off the payment of a debt until Tuesday next so he could turn his attentions to the immediate gratification of a life run on the self served hamburger.

Popeye when beaten down by happenstance and circumstance a natural victim in a world of cares without so much as a clue or a row to hoe on life’s past due bill. And often times in that bleakness and despair he would miraculously find the elixir of the gods a can of spinach alcohol that would make all things able to bear.

Popeye would be transformed with the ease and comfort that comes from the very first gulp. As the elixir coursed through him, it surged to the very core of his being, from the top of his head to the tip of his toe. Popeye’s strength now the strength of ten, he was previously mind numbing dull, having now gained possession of a rapier wit, easily vanquishing Bluto with a turn of a phrase or a decisive punch to the lip.

The adoration of women and the admiration of men were all in a nights work. The sought after affection of Olive Oil was quickly dispatched upon the eve of her rescue from the now vanquished arch enemy Captain Bluto.

Alas in the morning only to find himself once again and back again sleeping next to the dipsy dumpster on the dog pile of life searching for the remnants of last nights elixir, not to vanquish dragons but just so to tolerate the pain of realities bite of first light. 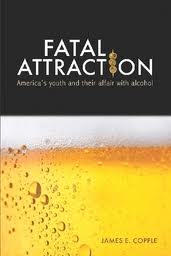 Woody would disclose that early on he was attracted to the initial seduction of the most potent of temptresses arrayed in the amber allure of fine cut crystal and engraven glass in the demure gossamer guise of the cunning, baffling, and powerful distillates of alcohol.

The affair started casual enough with the occasional aperitif and the customary business man’s two martini nooner. When Woody was wound up tighter than a tick he was easily made loose with a scotch or two, to defuse with ease his domestic transition. And at the ready a brandy night cap to insure some wood in order to log in a restful nights slumber.

The affair grew into a full blown relationship as his new found mistress would not be put off or be put back up on the shelf, not a minute would go by that the siren was not loudly demanding constant  and all consuming attention.

All attempts at break up were met with greater and greater demands of time, money, position, and finally even his beloved family was to be sacrificed through the flames of her fire.

Humiliation was like a crow that pecked on his head and the only thing left was to wish for the peace of the dead. Chuck had reached the jumping off point, thinking of living with alcohol or living with out it was too much to bear, a sense of pitiful and incomprehensible demoralization prevailed.

But as for me, my feet were almost gone; my steps had well nigh slipped.

when all roads are closed and the battle for life all but lost, in a moment of divine inspiration that only the drowning  know, he took a Step towards God  and that made all the difference.

Turn ye unto me, saith the Lord of hosts, and I will turn unto you, 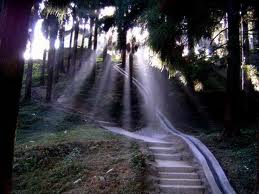 Woody found the rooms of recovery and has begun his trudge back into the sunlight of the spirit. Chuck has regained his sense of humor and meets life with joy and expectation, his family, well that’s in God’s time, but the road looks bright and it’s a clean and sober full speed ahead.